As we discussed in Part 1 of my series on ecommerce, there’s a major disruption on its way. Businesses and developers are seeking new platform innovations; the technology base is shifting toward cross-platform, cloud-based infrastructure that existing ecommerce platforms are challenged to provide; and even the payment and shipping industries are transforming.

BuiltWith analyzed a majority of the websites on the internet that use ecommerce technology, and here’s the breakdown: 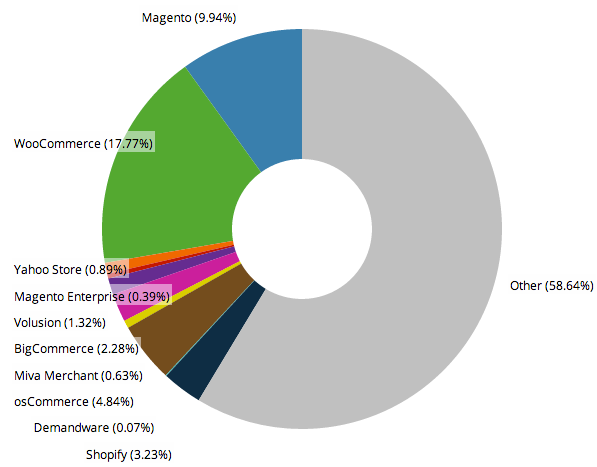 The truth is, nearly every ecommerce platform available today is already outdated. While WooCommerce is the most popular choice, it’s a plugin that was developed for WordPress, software primarily used for simple websites and blogs. WooCommerce isn’t suited for retail shops; instead, it’s built for people with niche shops selling only a few products that don’t garner much traffic or revenue.

Magento, the largest open source ecommerce platform, has a reputation for being feature-rich, customizable and scalable. It’s also known to be expensive, difficult to learn, time consuming and slow. It’s written in PHP, a predominantly server-side computer language that’s now 20 years old. Many developers’ chief complaints about Magento are that it’s written in PHP. The same is true of osCommerce and BigCommerce, as well as smaller platforms like Zen Cart and PrestaShop. While the wave of the future might look to be Shopify and Spree, both of which have recently attracted venture capital money, they also both use Ruby (and Ruby on Rails), technology whose growth has stagnated in recent years. 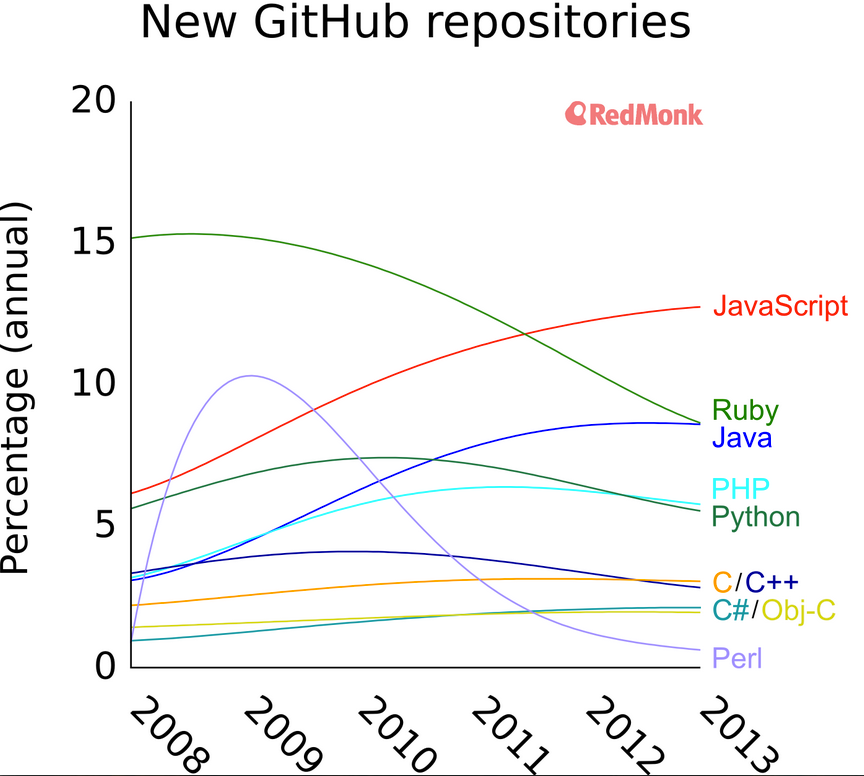 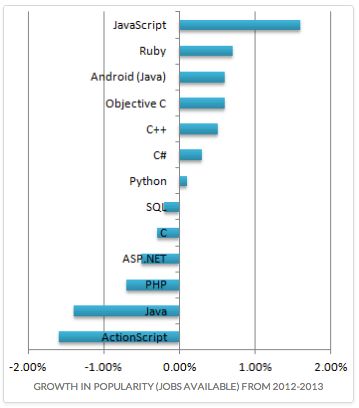 Why do we care about programming language? Because when you lose the developer community, you lose the road to progress and innovation. PHP is viewed as being old and boring. Ruby is dropping rapidly. According to the two biggest places for developers to communicate, GitHub and Stack Overflow, JavaScript is the language of choice.

From its humble beginnings, JavaScript has grown exponentially over the last decade in both scope and application. It’s the only language that can run in every modern web browser without the aid of plug-ins, regardless of platform. It’s fast, it’s easy to learn, it’s easy to trace and catch errors, and it’s a perfect fit for the ever-evolving web. Developers have been clamoring for a JavaScript-based ecommerce platform. They’re tired of how heavy, cumbersome, difficult and slow ecommerce has become. It’s not surprising then that in the six months since we did a quiet launch of our Alpha platform, a couple thousand developers jumped on to check it out.

Reaction Commerce is building the first JavaScript ecommerce platform. And it’s positioning itself as a leading choice for the next generation of ecommerce business. Beyond creating a new ecommerce solution built on modern technologies, Reaction is the first platform to offer a Marketing First approach that will provide real-time merchandising, real-time pricing and promotions, and live monitoring of conversions. Its reactive, event-driven technology will let shop owners observe and track what their customers are doing and make real-time changes to optimize sales.

You’ll get personalized, relevant merchandising. This means that if a customer living in Telluride, CO, visits a Reaction shop selling sporting goods in February, they should see products that are different from the shopper who lives in Palm Springs, CA, visiting the exact same shop. Reaction knows that it’s cold in one and warm in the other, and using data from social sites such as Pinterest, Twitter, Instagram and Facebook, it can see trends and then predict what’s popular by geography and by season. Thus, the Telluride shopper is likely to see skiing and snowboarding merchandise while the shopper in Palm Springs might see tennis and golf gear.

You’ll get dynamic, real-time pricing and promotions based on demand and popularity. Again, using social data as well as data from Reaction, a shop owner can predict trends and display promotions and discounts in real time—without page reloads and without needing an expensive data analyst or developer to program complex algorithms or rules! For instance, when the Hawks and the Swans are headed to the AFL Grand Final, the shop owner in Melbourne knows he can automatically offer a special deal on the team guernseys, and pump ‘em out like flapjacks.

You’ll get actionable data. Reaction is also creating a dashboard for shop owners that displays real-time graphs and data so that they can monitor conversions and buying trends as they happen, and quickly make decisions that help maximize sales. Why? Because every ecommerce action or event should result in a real-time Reaction.

All this, without page reloads. According to a recent study of the top 500 ecommerce websites by Radware, the average load times by users was 10 seconds, which is an amazing 47% slowdown over the last two years! Radware summed up what this means to the bottom line for businesses:

Time is money and customers don't use slow sites. A one-second delay in page time equals a 7% loss in conversions, 11% fewer page views and 16% decrease in customer satisfaction. Faster is better, and your website and web-based applications need to be lightning quick or you will lose customers and revenue.

If usability experts suggest a 2-second load time, why are we moving backward? Because web pages are getting bigger, more complex and more dynamic with multiple scripts and resources pulled from multiple servers and locations. And internet access speeds can’t keep up.

The revolution of Meteor means there are real-time updates. With Meteor, an open source JavaScript platform, all that information isn’t being sent back and forth between servers and resources like it typically was. Instead, when a client issues a write to the server, it also updates its local cache immediately without waiting for the server's response. This means the screen will redraw right away. Not 10 seconds. Not 5 seconds. Right now. Bam shazam! That’s called real-time reactive, and on another ecommerce platform it’ll cost you the salaries of a bunch of dev people and a whole lot of time to implement. But because Reaction Commerce is built on Meteor, well, that’s where they start.

Reaction is built on the Meteor framework. Part of the reason why so many people are excited about Meteor is because it’s built on top of Node.js, which is arguably the future of web development. It now puts JavaScript on the server side, then compiles and executes it in an event loop at lightning speed. In short, now JavaScript coders can build real-time web APIs. And Node has a rapidly expanding open source community with 50,000+ packages already queued up in the Node Package Manager that likely has already solved a problem you’re having.

Haven’t heard of Node.js? Well, more and more employers are making it a required job skill, indicating its potential to remake the programming landscape. Node.js is able to handle more traffic and it’s known for being easy. What once took weeks, even with the best tools, now takes hours. Developers refer to it as being an ultra-simple environment for building modern websites that are fast and responsive. And, with Meteor and Node.js, developers are having a lot more fun, too.

Meteor, known as a "developer favorite," is growing in popularity. Just three months after it’s launch in April of 2012, many JavaScript developers already knew about it. According to founder Matt DeBergalis, it “might have been the most popular product launch in the history of Hacker News.” And with their enormous $11.2M cash infusion from Andreesson Horowitz and Matrix Partners, it’s only going to keep growing.

"We’re in the midst of a transition that happens every 15 years where we change the way we write applications," DeBergalis says. On his Meteor website, he writes, “Writing software is too hard and it takes too long. It should be radically simple. It should make it possible to build a prototype in a day or two, and a real production app in a few weeks. Today, there's a chance to create this new way—to build a new platform for cloud applications that will become as ubiquitous as previous platforms such as Unix, HTTP, and the relational database.”

**Using Meteor and Node.js will entirely change the ecommerce landscape. **It’s time. We’ve reached that 15-year turning point. Ecommerce is currently too hard, it’s too expensive and it takes too long because the technology is outdated. A recent conversation in Hacker News asked the obvious:

The world of innovative ecommerce platform is pretty much standing still. The latest was Magento, and now they are heavy as heck, slow and hard to maintain. Why isn’t there a kick a** Node.js shopping cart that is easy to use like the Etsy interface?

Well, guess what? Now there is.